Skip to content
HomeGreat TV names that “evoke an image”

I hope you all had a great Thanksgiving!! I remain ever so grateful for all of you!! ❤

Something fun today — a reader emailed me with the following question:

“[M]y husband and I watch the TV show The Blacklist, in which the main character Elizabeth named her daughter Agnes at the end of the last season. I also noticed that in Gray’s Anatomy one of the couples (can’t remember their names, I just get glimpses of this show when hubs watches) named their baby Harriett. I wondered if you had any thoughts about TV show baby names/”bringing back old lady names”, whether Catholicky or not. It may not be a trend at all, if I just happen to have noticed the two times it happened in recent TV…I haven’t looked further into it, because the amount of TV is too overwhelming!“

Ohhh goodness, I feel that way too: “the amount of TV is too overwhelming!” My parents and my hubs and I are always on the lookout for a good show, and I personally find myself often overwhelmed at the number of options and the number of suggestions by family and friends. Not a terrible problem to have!

Anyway, back to this lovely reader’s question, I responded:

“[O]n the one hand, I feel like TV writers try to get a feel for how the trends are going and maybe get ahead of the next big trend if they can? And maybe them introducing the names that might have been the next big ones anyway (based on the fact that I think it takes two generations for names to stop feeling dated and start feeling vintage or something like that) cements them, or really gets it started?“

And then I took to Twitter, tagging Duana because she’s an actual TV writer! 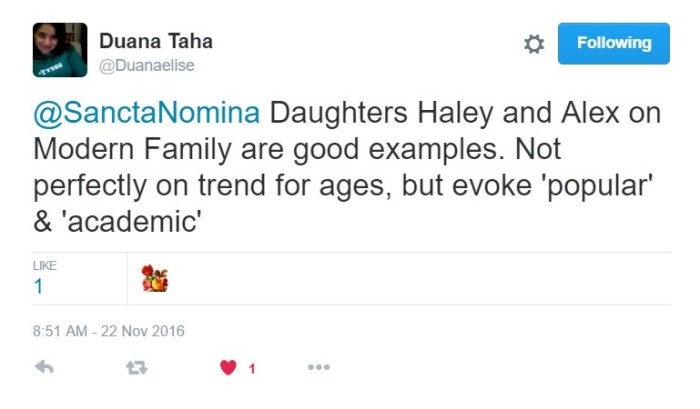 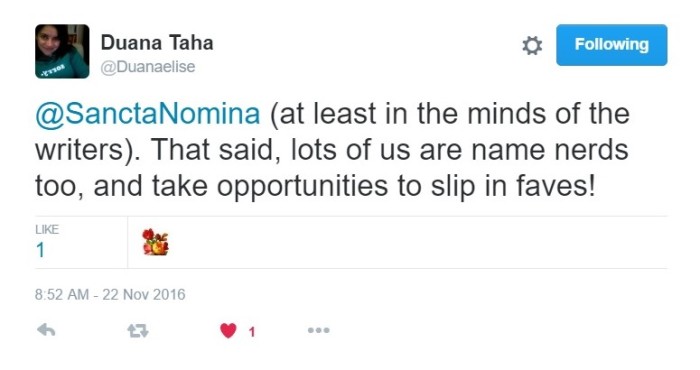 So fun to get inside TV naming a little, right? That phrase — “a name that evokes an image” — has been going around in my head the last couple days, and I kept thinking of TV names that I thought were bang-on (at least for me):

Both the first names and the last name of the Crane brothers say to me “pretentious, meticulous, Ivy League.” I have long been in love with these characters’ names, they’re so perfect! And could Lilith — the name of a scary demon in Jewish tradition — be the perfect name for a hated ex-wife character? Um, yes! (My husband thought I should include Daphne Moon, but I’ve never felt the name was quite right for her. I mean yes, they attempted to show her as a little flaky and with the whole “third eye” thing, which the name Daphne Moon does fit, but I never felt like they were successful with portraying her that way — I always thought she was wiser and more serious/grounded than her name suggests.)

For both Chandler and Rachel, it’s the last names that do it for me — Bing is just kind of goofy; Green is “inexperienced” — both seem perfect for their characters, with Green being especially good for how Rachel joined the group. Phoebe is both nature-y, being the name of a bird and the sound of its call, and goddess-y, being the name of a Titan goddess, and therefore is really great for a hippie-type character (though I don’t like that I know some people who won’t consider it for their own daughters because of the name being so connected to that character. But it is biblical and Grace’s Phoebe is doing wonders for the name and Friends ended over ten years ago [and aired over twenty years ago — wha??]). And Joey. Is there a better name for a good-guy buddy with simple tastes?

These two are listed together of course because both shows were on the TGIF lineup when I was a teen and though my parents rarely let us watch anything other than the G-est of G-rated shows, we did all gather for these Friday night shows and we loooooved them (if you know my brothers, don’t let them tell you differently!). Urkel is just the best last name for this nerdy character with the nasally voice! And Topanga was perfect for the child of hippy dippy parents.

Michael and Linc on Prison Break

Michael — not Mike — is serious like his name and a good/wholesome protective defender like St. Michael; Linc (in the context of the show) makes me think of chain-link fences and prison. Though I don’t love Lincoln and Michael as brother names, just because they have different feels, I do love Linc and Michael as these two jail-bird (but good-guy) brothers.

Jim is a great name for his character I think — just your normal guy in a normal, not-exciting job (contrarily, I’ve always HATED Pam’s name — not the name, just the name for her — it just always struck me as inappropriate for her age and without the appropriate image to make up for it. Pamela went from barely top 1000 in 1925 to #10 in 1953 and then slid slowly down again, though it didn’t drop out of the top 100 until 1984. So yes, it’s conceivable that Pam could have been named Pam, but it just always felt too 1953 to me, and what does 1953 hope to convey? But then the girl in The Fockers was Pam, so maybe I’m all off). Michael is such a versatile name, but I love that he was always Michael (unless he was Prison Mike 😂), which was really good for a boss that tried hard to be the boss, and I love that his middle name was Gary — the whole thing first+middle+last combo was just so him. And Dwight strikes me as kind of nerdy (no offense to any non-nerdy Dwights!), but also the staccato cadence of the full Dwight Kurt Schrute (as well as the Germanness of Kurt and Schrute) is very militaristic and goose-steppy, so perfect for him.

They’re three geeky, socially awkward twenty-something scientists, and I think these names convey that immediately! (Not if they were on older men, mind you, just on young men.)

This one is iffy. I do find it hard to believe that her parents would name a daughter Lorelai — it’s so perfect for her — kind of creative and funky — but not perfect for those parents to have chosen. However, I do appreciate that they explained Lorelai was her dad’s mom’s name — that does strike me as very them, to choose an old family name.

Those are just the ones that came to me over the last few days as particularly good — I’d love to know what TV character names you think perfectly evoke the image the character embodies! I’m being pretty strict here — I want *just* TV character names, not movie or book character names — I think (tell me if you disagree!) there is/can be a difference between how characters on TV/in movies/in books are named (I’ll do other posts on those later).

(Don’t forget to check out the Sancta Nomina marketplace for any of your Black Friday shopping! 🙂 )

16 thoughts on “Great TV names that “evoke an image””

Join 1,797 other followers
Find me at CatholicMom.com and Nameberry as well, writing about -- you guessed it!
If you're looking for Marian baby names, you've come to right place! Order your copy of my book Catholic Baby Names for Boys and Girls: 250 Ways to Honor Our Lady from Shop Mercy!

Happy feast of St. Nicholas! It was so fun to see my feed today full of pictures of your and your children's shoes set out, filled with St. Nick goodies! 🙏🎅🌟 What's your favorite Nick- name? My favorite is probably Nicodemus, which actually means the exact same as Nicholas! I also love Nikolai and the short forms Nico and Cole. Long-time readers may remember that my husband wanted to consider Nicholas for our youngest because he, a diehard Eagles fan, was very into quarterback Nick Foles at the time. 🙄 I hope you all had a wonderful feast day!!
Wow!! It's probably small potatoes for a lot of you, but 2,000,000+ hits is a big deal for me!! 🎉🎉🎉 Thank you all!! Happy second Sunday of Advent!! 🕯🕯
The nickname Bronze is because the baby's a III, right? Patrick Lavon Mahomes III called Bronze is pretty clever! I love seeing new #name ideas!
Happy Thanksgiving everyone! I'm ever so grateful for you all! And also for my boys who have been beating this path from the van to the front door for years. 🥰🥰🥰