Sarah’s consultation was one of the first I posted, way back in January, when she was seeking help naming their eighth baby, a boy. Yesterday she let me know he was born! She writes,

Louis Gabriel! What an amazing combo!! And even cooler is that, unbeknownst to me, it was on their original list (before my consultation), and though I didn’t think of it, one of our readers did! You are all very important to these consultations! Congratulations to Louie’s family!!!

When I posted the consultation for Angela and Tim Stark back in February, Angela was really hoping to convince her husband of the name Augustina Christi for their baby-girl-on-the-way, or at least find a way to compromise as they searched for the right name. She wrote, “He shoots down anything different or unique and I shoot down anything that sounds too common.”

The baby has been born! And she has a beautiful name!!! Little Miss Stark was named:

“Thank you so much for your assistance with the name, you were the one that got the wheels turning for us. The funny this is is that my husband ended up agreeing to Augustina Christi and I immediately shot down his recommendation of Rosemary. But for some reason my heart kept going back to Rosemary. It just seemed to suit her sweet personality. Rose is also my patron saint, Mary is just awesome, and saint Anne is just as wonderful. It just all seemed to fit for us. Plus we’ve decked out her whole wardrobe and nursery in roses! Thanks again for the awesome recommendations!”

What a great story! As I told Angela, stories like this always make me think of God whispering in the parents’ ear about the name the baby’s meant to have. Congratulations to the whole Stark Family!!! 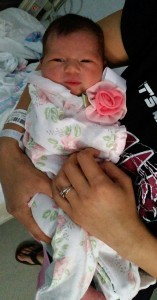 The SHAN-ick Family’s name dilemma was one of the first I posted — they were good with their boy pick, but were having trouble with a girl’s name. I’m delighted to announced that they did indeed have a girl! And what a beautiful name they chose! Mama SHAN-ick writes:

“I wanted to thank you again for your help and let you know that we had (drumroll) a girl! And we ended up naming her Rosemary Therese. She was born … after a very (blessedly) fast labor! I’ve attached some pictures: one from her birthday and a more recent one. 🙂

We pronounced Therese as “ter-EZ.” She’s named after Mary, obviously, and St. Therese of Lisieux. Rose is also a reference to St. Therese as well as Mary the Mystical Rose, and we’re getting to know Rose of Lima better now too. We haven’t talked about nicknames but we find ourselves shortening it to Rose and Rosie.

We’ve gotten great reactions to her name! It seems like it’s unique enough because although it’s very traditional it isn’t super popular right now (at least not among people I know!) We love it. She is so very Rosemary!

THANK YOU again! Your help was really wonderful.”

Isn’t Rosemary Therese just a gorgeous name?? Congratulations to the SHAN-ick Family on the birth of their beautiful baby girl!!

I posted the Enloe Family’s name consultation back in February, for their second baby due the day after Easter, and I’m so delighted to share the good news: their little boy was born this week! Mama Amy writes:

“Well, our SON was born this week after a crazy and fast 3 hour labor.

Although we almost choose the name James Magnus (to be called mostly by his middle name), we ended up going with:

His dad’s name, only with “the second” added on the end (not Jr.). We will call him Kane. As with his big sister Kristy, we found MANY reasons to use this name, with lots of tradition, meaning and some religious/Catholic connections. 🙂

– If you are going to do the Jr. thing, traditionally it should be with the first son.

– We liked the sound/look of II/the second better than Jr. But this is also my way of attributing a name to St. John Paul II. Plus he is our second child.

– …While pregnant with my first I started reading the new testament aloud to her, a chapter daily. I sadly dropped the practice at about 9 months of age. But I happily picked it up again towards the end of my pregnancy with him, after he could hear me in utero. I finished up the new testament, but for the bulk of our daily ‘Bible stories’ he has been listening to Genesis. The Beginning, where Cain comes in.

– I considered Martin __ (something) and going by the middle name with our first born. I don’t really like the name Martin, which is why I wanted to do that. With this one my husband brought up that he still liked taht idea but preferred his name. I have to admit, I have always liked the ring of his full name and am proud that is my husband’s name. It’s great and built for life. So I reconsidered Kane and the last weeks of pregnancy felt/wondered if that was his name.

– It matches Kristy in sounds, feel, and time period (in my mind). Seems like siblings names, but not the same number of letters/syllables to be too matchy matchy. Although, I don’t think we will name our next with a K, especially as it puts 3 K’s in a row – KKK, no. But anyways, all their cousins have 5 letters in their names, I like that she has 6 and he has 4. I also like that it doesn’t have a y ending as our family is heavy with that – Marty, Amy, Kristy, Lucy and Buckshot (the last two are dogs). Sounds right all together. Marty, Amy, Kristy and Kane. It is also a common/normal name, but not one often chosen now, just like Kristy.

– Other things about the name I like – I got a chance to use a more unique spelling (although I do like the Cain spelling too). You can’t really make a nickname out of it, something I prefer. And my first daughter has my middle name, and our first son has dad’s middle name.”

Isn’t that a great name story?! I love all the connections that are so meaningful to them — family, including a namesake for Dad; faith, including all the biblical connections and even JP2. And Martin Kane Enloe II is such a handsome name! Congratulations to Marty, Amy, Kristy, and Kane!! 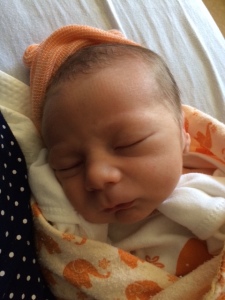 Theresa’s name dilemma kicked off Irish month as she was scheduled to have her eighth baby, a little girl, on St. Patrick’s Day. She emailed me an update and a photo of the new little lady!

“Everything went well, we’re back home with ::drumroll:: Rosary Brigid Elise! She was 6lbs. 14oz, 18.75 in, and has been a wonderfully happy baby with siblings who fight over getting to hold her.

About her name, there’s always that moment when you’re faced with filling out the Birth Certificate paper and you wonder if you chose the right name. But I’m confident we did. The consultation helped us to look deeper into other forms of Elizabeth, my sister’s middle name, since I liked Eilis, but my husband didn’t care for it. We came across Elise, which seems to still flow nicely.
So, thank you for the inspiration and input!! We have a beautiful name to go with a bonnie wee lass! 😉 “

So wonderful!!!! I just love her name!!! I never in a million years would have considered Rosary for a little girl, but because of Theresa and her beautiful baby it’s totally on my radar as a viable Rosie name. Nice work Heckamans! And I’m ever so grateful for the update! 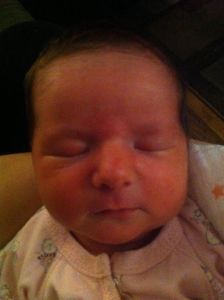 Back at the end of January Jessie wrote asking for help naming their fourth baby, a girl. She has wonderfully provided us with an update, and a photo!

“Kate! I’m so sorry for not updating you sooner! Our little girl was born on Valentine’s Day and we have just been so caught up in her that I forgot to write … [My husband] decided he would really like to honor his Great aunt, who was like a grandmother to him and to who he was very close to without directly using her names. Her middle name was Mary so I searched all your posts for Marian versions. We ended up with Liliana (lil-ee-ah-na) Grace. Lily for Mary, Ana for St. Anne, Jesus’ grandmother, since he always thought of his Aunt as his grandmother, Grace because I still liked it 🙂  We both love it and I never would have thought of it without your posts which included so many original ways to include Mary/saints in names. Thank you so much! I’ve attached a picture for you in case you want to use it in an update … we did truly love your suggestions. I’ve called dibs on Louise Philomena for next girl!!!“

How wonderful! Something that had really jumped out at me when Jessie first emailed was how she said, “I’d love something that matches the feel of both Eleanor/Ella like my first little girl but by the time I weigh everything else, I can hardly think about that too.” I totally think Liliana fits the bill! Nice job, Jessie and Hubby! And thanks so much for the update — it’s so fun to read the end (but really beginning!) of the story!