I did a private consultation for Lauren and her husband back in the fall — they were expecting twin boys, and Lauren has let me know that they’ve arrived! They’ve been given the awesome and significant names … Paxton and Porter!

“Our babies were born on Friday, January 26, via planned cesarean. In the days leading up to delivery we became more anxious about not having settled on names, but eventually decided to wait until they were born and see what felt right. Upon arrival at the hospital, everyone asked what we’d chosen for names and we told them we were still undecided. In desperation, we told the nurses to take a poll amongst themselves and let us know what they liked best.

For so long, we’d shared name possibilities with just a few people, so speaking the names out loud didn’t happen very frequently. Once we started speaking the names aloud to the hospital staff, it became apparent how much of a tongue-tie it would be to go with Paxton and Payton. The names just sounded so similar and I kept getting confused every time I talked about the choices out loud. For me, it was starting to become obvious that Payton just wasn’t going to work.

After the babies were delivered, saying the names out loud continued to be confusing. Baby A turned out to be nearly a pound smaller than Baby B, which pushed me more toward the Paxton/Porter choice. Baby A was always the one that seemed less active in the womb and seemed generally more content even after delivery (that still holds true today). It became apparent that Baby A was to be named Paxton, leaning heavily on my desire to have a “peaceful” child. Since Baby B was so much larger, and also apparently more vocal (plus disliking the complexity of a Paxton/Payton combination), he became Porter. So while my husband was concerned about the “porterhouse” label, it actually held true at the time of delivery and even became a running joke between us.

These days, Paxton is still SUPER chill — he only cries when hungry and sleeps allll the time (the cyst in his brain may be to blame, but we’ll go with it). The gap in size is closing, but Porter still remains obviously larger than his “older” brother, and is certainly more demanding (though he happens to be breastfed while his brother is not … the two issues are related, perhaps?). As a family, we have found the transition from one to three much easier than zero to one, likely because our first was super high-needs and this time we are not combating that with the lack of experience as parents in general.”

I’m sure Lauren won’t mind me sharing that I’d suggested Porter with Bl. Solanus in mind, since he was the porter (doorkeeper) at his monastery, so I’m extra delighted that they named Twin B Porter! And Paxton, with its pax=peace connection, is so meaningful.

Please also pray for both of the boys — they both have medical concerns that are being addressed by doctors, and I know Lauren and her hubs would love be assured of your prayers.

Congratulations to the whole family, and happy birthday Paxton and Porter!! 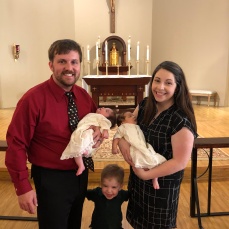 Paxton and Porter with their family ❤