I know a lot of families that do trips with their kids — big trips, little trips, every trip’s a trip.

At least, until yesterday! I’m still amazed at how well it went. I know for 1000% sure it was all those pilgrimage graces. 🙂  And also some mental preparation: all week I told the boys about our “pilgrimage” we’d be going on on Saturday. I explained what a pilgrimage is (focusing on how a lot of times the nature of a pilgrimage is to be somewhat difficult), and we talked a looootttt about St. Anne. I think I must have reminded my 3yo five times yesterday morning alone that St. Anne is “Mother Mary’s mama” and “Jesus’ Nannie” (their name for my mom) and I thought his head was going to explode every time. His jaw just kept dropping. It was the cutest.

It was a long day, because we broke up the 2+ hour drive with a stopover for lunch (takeout McD’s, the boys were in heaaa-ven. They were like, let’s do pilgrimages more often! Haha!), and were determined not to leave the Shrine for home until bedtime (so they’d fall asleep in the car). I packed a picnic dinner (grilled cheese, doritos, applesauce, brownies, gatorade), which we ate at a picnic table on the beautiful grounds while (yes, while) the boys ran around, rolled in the grass, dueled with huge sticks, etc. We used their public bathroom a whole bunch of times.

I did try to find that Mother’s Garden … I never did find anything so marked, but there was this sweet little spot with a small bench and a bubbling fountain and this lovely statue: 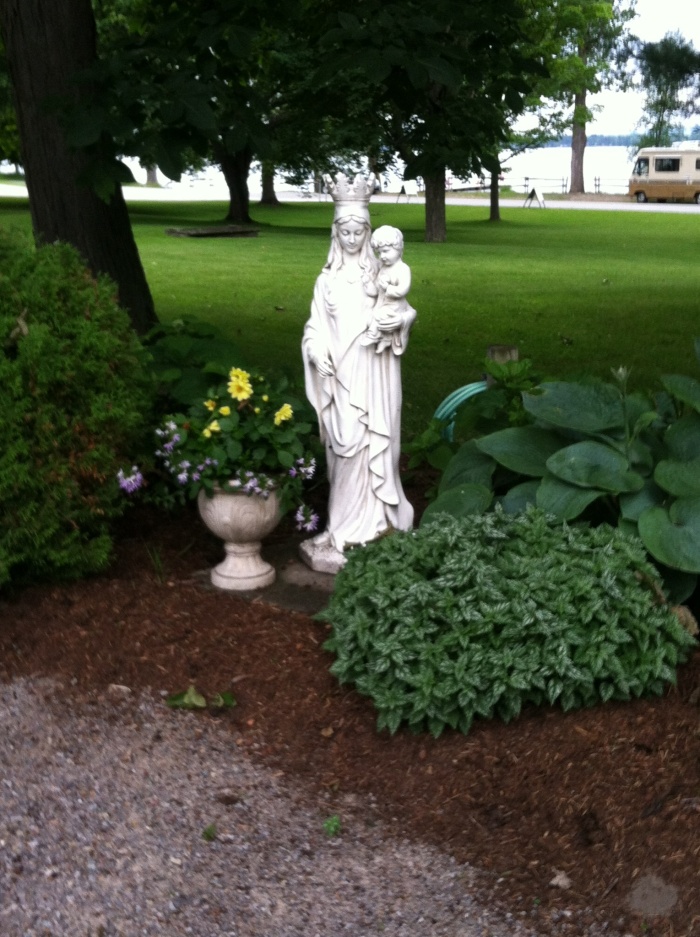 so I’m thinking maybe that was it?

I discovered that the Edmundites administer the Shrine — I’d never heard of them! Looking them up just now, what an absolutely perfect mission they have:

“Who we are is defined in large part by our long history of responding to real and challenging issues of the day … The Society of Saint Edmund began in the 1840s in a rural region of France to revitalize the faith of people who had become increasingly alienated from the Catholic Church.“

One story was just beautiful:

“Early in 1965, Edmundite Fr. Maurice Ouellet, pastor of St. Elizabeth’s African-American mission in Selma, answered a knock at his door. He was surprised to see [Martin Luther] King [Jr.] standing on the front step.

“The Negro people tell me there is one white man in Selma who is black,” King said by way of introduction, “and I want to meet him.””

(Be still my heart!)

This is their outdoor church, where we attended the Vigil Mass:

Do you see the actual church building on the left? And how the whole front is one big gray door? I think it’s like a roll-down door, like a garage, because during Mass it was up, and it was just big enough for an altar and chairs for the priests and lectern and altar servers, so the pavilion housed the pews. I would have loved to have gotten a picture of the altar and beautiful statue of St. Anne inside, but while the Mass-goers were dispersing I headed over to a small A-frame to see what was there, and it was the thing I’d been hoping to find:

I lit a candle for all the intentions I promised to bring — it’s the one in the back row of candles in the bottom of the picture, the fifth from the left, between the super bright one and the 3/4 dark one. There were pads of paper where we could write down our intentions, so I did — you’re all covered!! 🙂

When I finished there, I went back to the church/pavilion in hopes of getting a picture of the altar and the St. Anne statue, but it was all closed up. This one was on the ground next to it though:

It makes me think of “Lovely Lady dressed in blue, teach me how to pray,” except it wouldn’t be blue for St. Anne — pink? At least, I always think of pink as her color.

After Mass we changed diapers and used the bathrooms again (!) and headed home, but not before I got this sweet pic of my youngest (and his little toes!) watching his brothers play (while I fed him a brownie):

I’m still flying high with the loveliness of the day, it was truly a #MissionofJoy, and the perfect way to celebrate the blogiversary. 🙂 ❤

UPDATED: I made the pics bigger.