Skip to content
HomeOur St. Anne pilgrimage, and a giveaway!

I am so sorry I’m delayed in posting this! I’ve gotten swept up in summertime, I know you all know how it is!

So Monday was my two-year blogging anniversary! A day in which I’m reminded, again, how grateful I am for all the blessings that have come to me through this site — and you all are such a big part of that! I was so glad to pray at the Shrine of St. Anne in Sturbridge, MA for all of the specific intentions you sent me over email and FB, as well as some of my own:

I told you that it would be a most efficacious trip, grace-wise, because of alllll the suffering involved in traveling with my boys (one of the worst things I can think of! Not even joking! Though of course it has gotten better the older they’ve gotten), and I was right. A funny little story I’m sure you’ll all enjoy: My brother-in-law came with us, and gamely sat in the back with my No. 2 and No. 4, and No. 2 threw up four times in the last hour of our trip there.

He does get motion sickness, which I somehow always seem to forget, and fortunately — and amazingly — this was the first time I was able to pass a plastic bag to him before he threw up all over the van! (St. Anne!) But then one of the bags (of the four) had a hole in it, and his shorts and shirt were covered, and my brother-in-law was helping with napkins and bags while we raced to the next rest area where I ran in to buy him new clothes because no, I would never think to bring extra clothes for my almost-ten-year-old on a day trip. I was able to get him a t-shirt, but they didn’t have shorts, so I bought two Patriots beach towels — one for him to put on the pukey seat and one to wrap around himself beach-style. He was mortified to walk around the Shrine grounds that way, but what are you going to do? And my husband saw the Patriots logo and was like No. My son’s not wearing that. But again. What are you going to do.

There was also backed up traffic, just around when the motion sickness was taking hold, and the last hour of the trip I think should have only taken twenty minutes. But then — the Shrine! So lovely!

The first statue I saw was of the Sacred Heart: 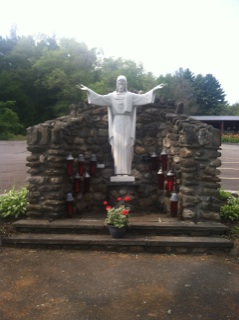 (So sorry some of these images are so small — I’ve been trying to fix them for two days and I’m just going to leave them as is.)

Some other heavenly friends: 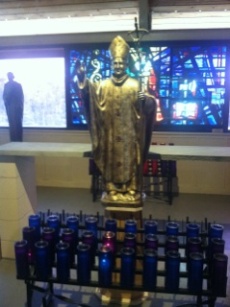 And of course St. Anne. This statue was in one of her votive chapels:

As I said on Instagram, I love seeing her portrayed as a queen. I said the prayer they had posted for all of you and your intentions, both the specific ones I brought with me and the ones you all hold in your hearts, and lit a candle (the one right in the middle). 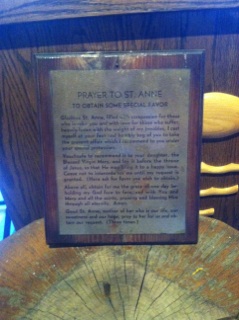 I also offered my Mass for you all, which was held in a beautiful outdoor pavilion, and during which they prayed for all the parishioners and pilgrims present. When they said “pilgrims,” my hubs and I glanced at each other — it was such a nice little heavenly hello! There were also pink flowers that kept blowing into the pavilion during Mass, which was so lovely and so St. Anne! 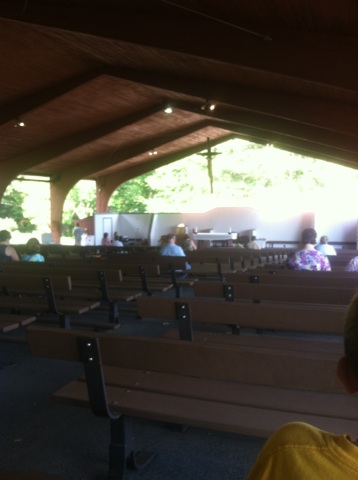 She was present everywhere, of course, from the stained glass windows:

To her hubby’s name on the Parish Center and his very own chapel:

And there was this gorgeous statue, which I’ve never seen before! I’ve seen the one with just the holy family, but never with St. Anne and St. Joachim as well:

Beautiful right?! And look at that inscription!

That’s us!! We are absolutely covered in prayer, what a wonderful blessing.

I did make a quick stop in the gift shop, where I saw this, which I know you’ll all appreciate: 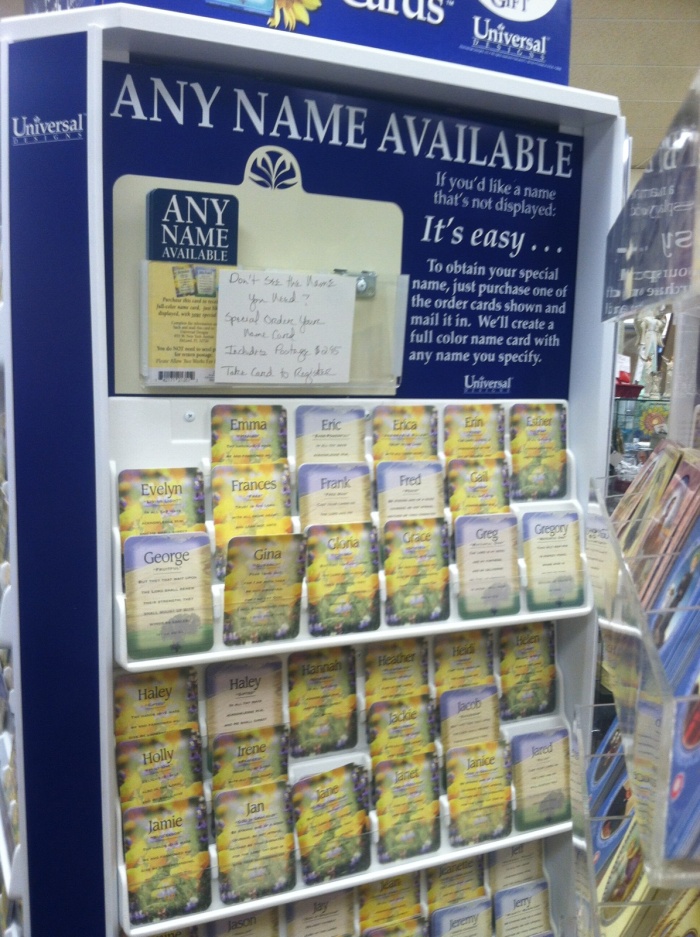 “Any name available”! All the unusually-named kids can now have their own personalized things! (Or at least this one name card.)

I didn’t get anything there for you all, though, like I did last year, because I was presented with a different idea this year, which I think you’ll all love! Do you remember the SaintAnneStudio Etsy shop that was linked to in my Nameberry article last week? The St. Zelie peg doll was the featured image for my article? Well. I just couldn’t get over the discovery of SaintAnneStudio right at the time when I was thinking about her so much, and there are absolutely gorgeous things in that little shop, so what I have for you all this year, as a thank for being such wonderful, joyful readers, is a giveaway of this beautiful St. Anne peg doll:

As well as a gift certificate for another peg doll of your choice — either one that’s already in the shop (there are a LOT!), or a custom-made one.

Beautiful, right?! I’m so pleased! I hope you are all as excited about it as I am!

So to choose the winner, I thought I’d do the rafflecopter thing, which I’ve never done before, and I’m just trusting it’s as easy to install and run as they say it is. Just click on this link for the Sancta Nomina St. Anne Rafflecopter giveaway, and you should be good to go!

It’ll go through Sunday, and I’ll announce the winner on Monday (which is also July 4, which on the one hand seemed a bad day to do anything blog-wise because you’ll surely all be out and about with hot dogs and swimming and fireworks, but on the other it’s a celebration day, so a great day to announce a winner!) (I’ll post next week’s consultation on Tuesday).

14 thoughts on “Our St. Anne pilgrimage, and a giveaway!”